The iconic and beloved NYC retailer, Century 21 Department Store, announced yesterday that they will be closing all 13 of their locations. Century 21 was a true shopping landmark and stood as the last bastion of designer bargains and off-price deals in New York City. The family owned business has been operating in downtown Manhattan since 1961. Over the last five years they had expanded to locations in Florida, Pennsylvania, and hosted pop-ups in California. While it seemed like things were going well, C21 was slow to adopt their business model to full e-commerce and then the forced COVID-19 shutdown delivered the killing blow.

The effects of the pandemic have been devastating all around. With countless lives lost, rampant unemployment, and many business forced to close forever. Century 21 now joins a long list of retailers that have filed for bankruptcy are going out of business. More than 4,000 employees are set to lose their jobs. According the the official press release, the decision to close follows the nonpayment of approximately 175 million by the company’s insurers who were supposed to protect them against losses stemming from the pandemic. This brings to light just how much responsibility the insurance industry bears towards economic recovery and how little they care that their own customers are filing for bankruptcy and are forced to go out of business.

“While retailers across the board have suffered greatly due to COVID-19, and Century 21 is no exception, we are confident that had we received any meaningful portion of the insurance proceeds, we would have been able to save thousands of jobs and weather the storm, in hopes of another incredible recovery.”

I’ll admit this news hit me hard! Sure you can say that it’s “just a store”, but to me Century 21 was like an old friend so writing this post feels like a personal eulogy. I come from a family of immigrants. When we first moved to New York (and America) we couldn’t afford most things. Designer fashion was something I’d only seen in magazines and films. I remember our relatives first taking us to Bergdorf Goodman and Saks Fifth Avenue where I was absolutely wowed by the glamorous displays, impeccable fashions, and stylish shoppers. It was also then that I realized that I probably would never be able to afford any of those things. I was a child (twelve) so I didn’t fully dwell on it. Plus I wasn’t as interested in shopping at the time. My mom did all my shopping and I was happy enough.

A couple of years later my mother started taking classes in downtown Manhattan and soon got a job working in a nearby building. This meant an occasional lunch or after work trip to Century 21. I still remember how excited she was when she found her first real bargain: a pair of Yves Saint Laurent sandals for only $30! As I got older I would join her on those bargain hunting trips. During the big 90% off clearance sales we would take the train to the city to see what goodies we could find. In my late teens my favorite brand was Diesel and I was overjoyed to score a pair of tall leather boots for under $50. I always had big calves so finding designer boots (on clearance and in my size) was a big deal! I must have worn them for a good 15 years before they finally fell apart and could no longer be repaired.

Over the years Century 21 continued to be my go to destination for designer finds and affordable fashions. There I could find the same brands that the rich Upper East Side folks wore but I didn’t have to pay full price. Sure the styles were usually old but I was able to fill my closet with brands like Missoni, Pucci, Fendi, YSL, and the list goes on. When I started this blog, some of my more popular posts were about C21. I loved how accessible it made fashion for those of us who normally wouldn’t be able to afford it. Here’s a list of some of my best finds and you can see why I loved this store so dearly.

The sad truth is that nothing can or will ever replace a store like Century 21. It went from being a locals’ “insider secret” to a world famous destination for international tourists. The type of merchandise and deals that were offered simply aren’t available elsewhere. Nordstrom Rack is but a pale comparison and none of the online stores come remotely close. Century 21 survived the last recession, they stayed strong after 9/11 when the flagship store remained closed for six months but this time the insurance companies failed them and New Yorkers lost an institution.

Now Century 21 joins the list of other iconic NYC retailers that we have lost over the years. Loehmann’s, Daffy’s, Syms, Anbar Shoes. Does anyone else remember shopping there? It’s so sad that younger generations will never get to experience them. Instead they’ll opt for the easily accessible fast fashions on Amazon while the ultra rich will continue gate keeping designer goods from the masses.

As with any store closing I’m sure you’re wondering about what happens to the remaining inventory and when the clearance events will begin. According to the press release the going-out-of-business sale has commenced at all stores and online. Although there has been no announcement regarding the final closing date nor who will be handling the liquidation. Other stores that recently shuttered (Barney’s, Lord & Taylor, Modell’s) have all outsourced to an outside liquidator. We don’t know yet if C21 will follow that path but it’s the likeliest scenario. Unfortunately it means that prices will get jacked up and initial discounts will be too low to bother (think only extra 10-20% off). Century 21’s own recent clearance sale offered an extra 75% off red tag clearance. Another thing to keep in mind when it comes to third party liquidators is that they tend to flood the stores with their own cheap quality merchandise. Be very careful and always inspect every item. Best time to shop looks to be right now, while Century 21 is managing their own liquidation.

I will try to keep you all updated as more information becomes available but I’m still in shock. A part of me hopes that someone will swoop in last minute and at least rescue the downtown flagship store but it is just a dream.

Goodbye old friend, you will be missed and New York City will never be the same without you! 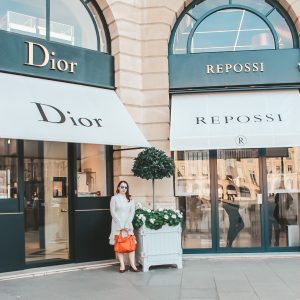